How intestinal bacterial fatty acids reach the brain. Can it affect the sensation of hunger? 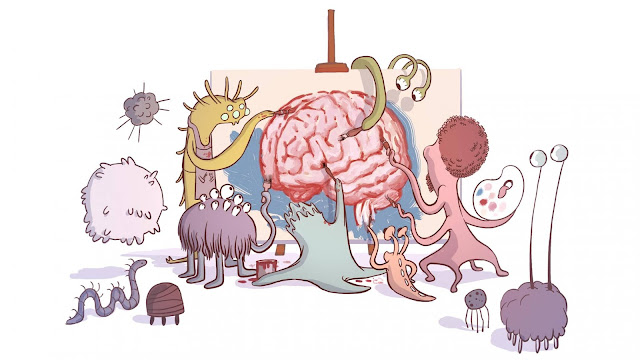 In recent years, there has been a growing interest in the relationship between the intestinal bacteria population, and the risk of obesity and high sugar levels in the blood - the two main characteristics of the metabolic syndrome, namely risk factors for type 2 diabetes and heart disease.

A decade ago, a researcher from the University of Washington in Missouri published a groundbreaking paper showing that intestinal bacteria can cause obesity in mice. This has paved the way for many human studies and the identification of microbes that are involved in obesity or can prevent it.

In recent years, fecal implantation treatments have been developed that change the population of bacteria in the human intestine. These treatments have had promising results in the treatment of diabetes, and are now being tested for their effectiveness against obesity.

The vast knowledge accumulated about the relationship between the microbiome and obesity may disguise the fact that we still know little about the mechanisms by which bacteria cause obesity.

If we know more about these mechanisms, we can develop targeted, effective, and side-effects free therapies. An important step in the matter was apparently made by a group of researchers from Yale University.

In an article published in the journal Nature, researchers describe an obesity mechanism involving intestinal bacteria, the parasympathetic nervous system, and Acetate.

Acetate is a short fatty acid, the quality of its association with obesity has not been clear so far. Studies have shown conflicting findings about the ability of such acids to cause or prevent obesity.

The contradictions may be due to the concentration of Acetate measured in stool or blood samples, and such measurements do not necessarily reflect the concentration of Acetate in other tissues. The researchers in Yale have developed a method based on radioactive labeling of acid, which allows for accurate monitoring of changes in short fatty acid levels throughout the body.

In this way it has been shown that feeding rats with high-fat foods causes an increase in the level of Acetate in both the digestive system and the brain. Increased levels of Acetate caused overeating, obesity, disruption of insulin secretion in response to glucose and accumulation of fat in the liver and muscles of the rats, all characteristics of the metabolic syndrome.

In a long line of experiments, researchers have shown that it is the gut bacteria that produce the Acetate in response to high-fat foods. When rats fed high-fat foods were treated with antibiotics that affected both the amount of bacteria in the gut and their variety, lower Acetate levels were measured.

A similar result was obtained when mice were grown in sterile conditions or in rats whose large intestine (and the entire population of bacteria in it) were removed surgically. In addition, the researchers showed that the acid produced in the intestine could penetrate the brain through the blood-brain barrier.

After showing that Acetate molecules mediated insulin secretion in response to glucose, the researchers decided to examine the involvement of Acetate in the activity of the parasympathetic nervous system.

This system controls processes that take place at rest, including mechanisms of hunger, satiety, and insulin secretion. They blocked the activity of the parasympathetic system by cutting the Vagus nerve and by injecting Atropine. These treatments, both surgical and chemical, prevented the effect of Acetate on the development of the metabolic syndrome, even when the acid was injected directly into the rat's brain.

These findings have shown that the parasympathetic nervous system is involved in the disruption of the Acetate in the secretion of insulin in response to glucose.

In the new mechanism described by researchers, increased levels of Acetate due to eating high-fat foods directly led to the activation of the parasympathetic nervous system, so that more insulin was secreted in response to glucose.

This condition is called "pre-diabetes". In addition to the secretion of insulin, the effect of Acetate on the parasympathetic nervous system led to an increase in the level of the hunger hormone, Ghrelin.

Because this hormone encourages eating, positive feedback is created: high-fat food intake encourages overeating, contributing directly to obesity and indirectly to the development of diabetes - because of the activation of the parasympathetic nervous system and increased secretion of insulin.

Disruption of the mechanism

In our digestive system there are thousands of bacterial species, and to date, researchers did not examine which ones are responsible for producing Acetate. Previous studies have suggested that these are Firmicutes bacteria, which thrive on eating high-fat foods.

According to existing information, it is quite possible, but this has not yet been proven. It is also unclear whether this is the only mechanism or that the microbiome is involved in other mechanisms of obesity.

If researchers do discover the bacteria that are also produced in humans, discovery may pave the way for the development of anti-obesity treatments based on the disruption of this mechanism. Until then, we will have to make do with the usual ways of maintaining weight, and pay attention to what and how much we eat.