Too little sleep? You are at Risk for a Heart Attack

US researchers who have tested thousands of adults have found that lack of sleep or excess sleep causes the heart to age significantly and increases the risk of cardiovascular disease.

What are the optimal sleep hours for reducing risk? 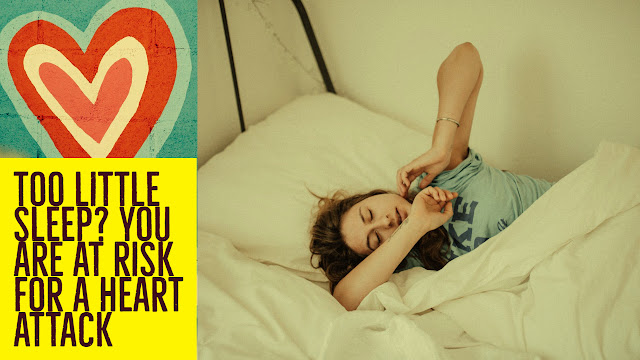 Adults who sleep too little are at high risk for a heart attack or stroke, scientists say, finding that the heart is aging as a result of lack of sleep.

The researchers and their colleagues analyzed data from a survey of 12,755 participants between 2007 and 2014. Subjects were between 30 and 74 years old, with no history of heart disease and stroke.  Subjects were asked about their sleeping hours during the night.

In the next stage, the researchers processed the data and translated it into "years of heart age".

The age of the heart is determined by a risk profile set in 2008 in a large heart study called Framingham.

The higher the age of a person, the greater the risk of heart disease. For example, when a 40-year-old has a 44-year-old heart rate determined by his risk factors (such as high lipids, diabetes, hypertension, and smoking), his heart is four years "older" of his chronological age.

Those who slept five or fewer hours were at the highest risk of heart aging - 5.1 years older than the "real" age of the heart.

"Long periods of sleep deprivation have a negative effect on many cardiovascular systems," says team leader Kanehe Yang of the Center for Disease Control in Atlanta.

"Studies have shown a significant link between duration of sleep and heart risk factors, including hypertension, smoking, high levels of cholesterol and obesity.

"Sleeping too much or too little increases the risk of health," the researchers said. "Calculation of sleep-time sleep may persuade more people, especially young people, to sleep at the optimal 7 hours a night."

How many hours should sleep at any age?

According to recent guidelines from the American Geriatric Association, lung medicine, psychiatry, and neurology, the experts say most of us sleep less than recommended and do not take the importance of sleep in our lives seriously enough.