December 29, 2018
Measles, considered to be the most contagious infectious disease in the world, is once again in the headlines. What are the symptoms? Is it dangerous? How can I prevent it? 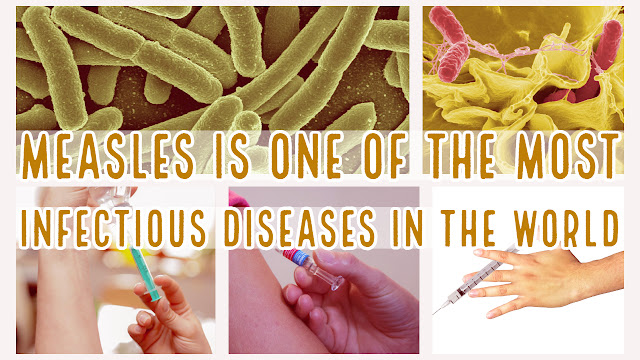 Measles is one of the most infectious diseases in the world, The chances of contracting measles for a person who have not received a vaccination from a sick person is higher than 90%.

The measles vaccine is very effective: between 97% and 99% of those who received the two necessary doses, are immune to the disease.

The disease is transmitted from person to person through respiratory secretions and other contact with a sick person.

Although there is a vaccine against measles, the disease is relatively common since the rate of immunization against the disease has declined over the years.

In October 2018, the European Center for Disease Control and Prevention (ECDC) announced that between January 2018 and mid-October 2018, more than 42,000 people were infected in Europe, 33 of whom died as a result of the complications of the disease.

The incubation period lasts for an average of 14 days (between 6 days and 21 days). Symptoms of measles include high fever, coughing, runny nose, irritation of the eye (red eyes).

The main symptom that indicates measles, is a widespread reddish rash all over the body. This rash usually begins in the neck and spreads towards the face, back and limbs. The rash looks like a dense cluster of red dots.

These points tend to connect to each other and create extensive red lines on the skin.

Three to four days after the onset of fever, the characteristic a rash appears. After about three days the rash begins to pass; it becomes more and more pale until it disappears completely. When the rash is over, you start to feel better.

In order to confirm the diagnosis, it is also possible to examine for measles antibodies in the blood as well as the examination of the virus measles in the urine.


How dangerous measles is?

Complications during or after measles are very common and occur in about a third of the cases. The disease can lead to ear infections, diarrhea, inflammation of the corneas, pneumonia, and other rare but life-threatening complications including:

This is a rare complication that occurs in about 0.1% of the cases, but it is dangerous and potentially fatal.

One to two patients out of a thousand may die from measles. The leading cause of mortality among children is pneumonia, which accounts for about 60% of mortality rates. Among adults, the most common cause of death is inflammation of the brain tissue.

In general, the risk of complications from the disease is higher in children under the age of 5 and in adults age 20 years or older. The risk is especially high among undernourished children, mostly in developing countries, among pregnant women and those with an immunosuppressed immune system.


Is there a vaccine for measles?

A vaccine-composed of a live virus-has been in existence since the 1960s. This is a very effective vaccine: between 97% and 99% of those who received the two necessary doses of immunity are immune to the disease. Despite the severity of the disease and the effectiveness of the vaccine, there are populations that are not vaccinated, and there are outbreaks of measles.


Possible side effects of the vaccine

Some of the recipients of the vaccine may have side effects that are usually mild, Including redness and swelling at the injection site, rash and fever.


Those who are advised not to get measles vaccination?

Anyone who had measles or two-dose vaccine is considered protected. Determination of diagnosis or immunization status is done by a physician.
In the case of exposure, it is recommended that you contact the Health Bureau in your area immediately.

Depending on the age and status, the need for vaccination will be decided. A person who received two doses of measles vaccine at a time interval of at least four weeks between doses given after 12 months is considered protected against the disease.
Contact your doctor immediately and inform him in advance of the risk of measles. If measles is diagnosed, keep your hands clean and try to avoid contact with children or people who are not vaccinated, especially those with immunosuppression.
Before you travel abroad, it is recommended to complete two doses of measles vaccination, in accordance with, if you are exposed to the virus during your stay abroad, consult your local health office.
More than 41,000 children and adults have contracted measles since the beginning of the year, according to the World Health Organization (WHO). At least 37 people have died so far from the disease in Europe.

In 2017, the number of people with measles was 23,927. In 2006, the number of infections in the disease was only 5,273. According to the World Health Organization, the cause of the outbreak is the increase in the rate of vaccine refusers.
Topics health measles vaccine