Is it possible to drink alcohol when taking antibiotics?

Everyone knows that drinking is not allowed when you take medicine, but some people do it anyway.

So what actually happens to the body from the combination of antibiotics and alcohol? Is it really harmful? Here are all the answers. 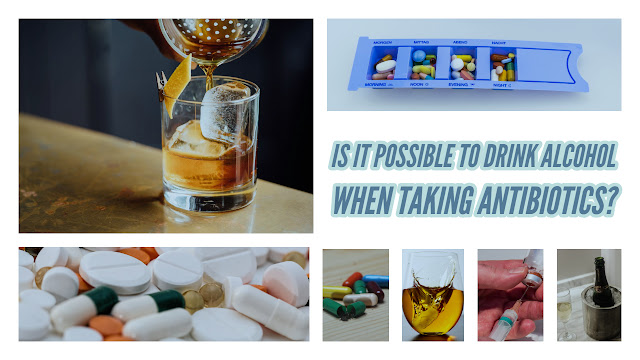 It happens to everyone, you get sick, suffering, going to the doctor, getting antibiotics and then feeling better, but you have to continue taking the medicine for a few more days. In these days life itself continues as usual, and you often find yourself sitting in front of a glass of wine.

Then the question arises: Is it permissible to drink alcohol when taking antibiotics?

Most people are sure that the answer is really not, but choose to drink anyway.

Or have they avoided all these years in vain? Since this is one of the most common questions, Exactly what happens to the body when taking drugs and not giving up the beer, and why is that forbidden?


What is the problem with the combination of antibiotics and alcohol?

By the end of the 19th century, certain substances were interacting with alcohol, causing a severe reaction in the body.

The first material - commonly used in industry - was called disulfurm. disulfurm is used as a treatment for alcohol withdrawal because after consuming it all alcohol drinking leads to symptoms such as nausea, vomiting, excessive sweating, headaches and accelerated heartbeat.

In the mid-20th century, a combination of alcohol and antibiotics called metronidazole has similar symptoms of disulfurm, so the combination is not recommended.

metronidazole is an antibiotic given in many diseases related to the digestive system but not only.

metronidazole is not the only antibiotic that has been reported to have a reaction with alcohol.

There are also very common antibodies that have been reported to have milder reactions with alcohol, such as the cephalosporin drugs used to treat respiratory, skin and urinary infections.

So all the antibiotics are problematic with alcohol?

No. Surprisingly, the vast majority of the drugs do not cause alcohol interaction. Antibiotics are very common, such as Augmentin, Aznil, Zefi and Ciprofloxacin do not have warning against the combination with alcohol.

While there are no studies proving that consuming alcohol during an antibiotic treatment is a completely safe thing, but apparently the potential for interaction is relatively low.


So can you drink a glass of wine during an antibiotic treatment?

Looking at the broader picture of the context in which antibiotic treatment is often given, it seems that alcohol consumption is not recommended, and not necessarily Because of the antibiotics.

In general, it is not advisable to drink and certainly not to get drunk during acute illness, whether you are under antibiotic treatment or not.

Acute infectious disease is a condition characterized by an increase in energy requirements of the body, increased body temperature and decreased appetite - a problematic combination that may lead to dehydration.

Dehydration is a condition that may worsen after consuming alcohol, which is a substance diuretic.

Another problem is that during acute illness, people take drugs other than antibiotics, such as painkillers, various types of fever, and over-the-counter drugs.

A combination of these drugs and alcohol may be problematic, and thus worsen the side effects or cause liver damage and therefore not recommended.