Headaches as a precursor to pregnancy.

Headaches can represent the first sign of pregnancy and appear against the background. Hormonal changes that the body undergoes upon becoming pregnant.

After egg fertilization and pregnancy, changes occur in hormone levels estrogen and progesterone. Which can affect blood flow to the brain and cause headache.

Many women find that early pregnancy is accompanied by early symptoms, which they suspected existed.

The problem is that these symptoms are discovered only after the fact, when the woman discovers that she is pregnant and analyzes the onset of symptoms.

A headache as a sign of pregnancy does not have to appear during pregnancy or as a precursor, and in fact all other preliminary symptoms vary from woman to woman and from pregnancy to pregnancy. 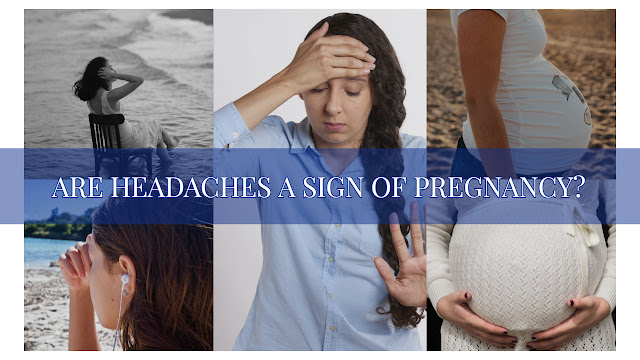 Even before the blood or urine test, when the woman is sexually active and does not take or use any contraception, and when the headaches are added to other symptoms, the most important of which is delayed menstruation.

Headaches may appear as part of the hormonal changes that the woman experiences. In some cases, headaches can also be caused by anxiety and fear accompanying the feeling of pregnancy.

Even women who have planned pregnancy and are beginning to 'feel' it experience confusion and anxiety when pregnancy takes shape. Because symptom-like headache are not specific, and may indicate a number of other events or illnesses, the recommendation is to consult a doctor or do follow-up tests to confirm the existence of the pregnancy.

Headaches may be caused by a significant hormonal changes occurring at the beginning of pregnancy, an increase in progesterone and estrogen levels.

The hormone secretion increases to prepare the uterus for fertilizing the fertilized egg and predicting pregnancy. However, headaches may also include other factors such as dehydration, hypertension or low blood pressure, or eye problems.

Some of the factors are related to pregnancy and some are unrelated. If there are hormonal changes, it is likely that the woman will also feel changes in mood.

However, the suspicion of gestation will become apparent when other symptoms appear beyond the headaches, such as breast tenderness, change in the color of the nipples, fatigue and nausea.

Headaches are characterized by a very strong intensity, which does not change as a result of rest or activity. It is estimated that women who have suffered from migraines before pregnancy do not experience headaches as a precursor or a phenomenon that accompanies pregnancy.

However, sometimes their sensitivity and awareness of headaches, which they suffer frequently, make them think that this is also a preliminary sign.

Usually, when it comes to early symptoms, prenatal symptoms are specific and individual and vary from woman to woman, and from pregnancy to pregnancy.

Thus, women who have felt a headache during their first pregnancy are not obliged to feel a headache or similar symptoms in their subsequent pregnancies.

This headache can not also determine the health of the pregnancy, or the stage at which it is found.

When headaches accompanied by other symptoms, the simplest test for pregnancy is a home-based test, which is done through a non-prescription pregnancy kit.

Additional tests that can reveal pregnancy are a simple blood test or a urine test.

It is not advisable to wait for a symptom such as a headache to perform the test or to rely on the headache as an indication or confirmation of pregnancy.
Topics headaches health pregnancy